This time of the year, we receive a lot of calls concerning anthrax infection and vaccination for anthrax. Because this topic is on a lot of people’s mind, I thought it would be helpful to reprint a recent article by Dr. Charles L. Stoltenow, Extension Veterinarian for North Dakota State University. Dr. Stoltenow has written an excellent review of Anthrax and has graciously given Colorado Serum Company permission to reprint this article.

Anthrax occurs worldwide and is associated with sudden death of cattle and sheep. Anthrax can infect all warm-blooded animals, including man.

The anthrax organism (Bacillus anthracis) has the ability to form spores and become resistant to adverse conditions. Anthrax organisms in animals or their secretions may be destroyed by pasteurization or ordinary disinfectants. However, if the animal carcass is opened and the organisms are exposed to air, they will form spores. Sporulated anthrax organisms are highly resistant to heat, cold, chemical disinfectants and drying. The anthrax spore may live indefinitely in the soil of a contaminated pasture or yard.

Herbivores — particularly cattle and sheep — are susceptible to anthrax. Horses, swine, deer, and humans are less susceptible than cattle or sheep. Wild ruminants such as deer may also become infected. Dogs, cats, and birds have been infected experimentally.

Sources of Infection
Outbreaks typically occur when livestock are grazing on neutral or slightly alkaline soil. Infection in cattle, sheep, or horses usually is the result of grazing on infected pasture land. The organisms usually enter through the mouth, and less often via nose or skin injury. Following ingestion or inhalation, the organisms spread rapidly throughout the entire body.

Dead animals that are opened and not burned or buried provide an ideal source of the organism. It is imperative that diseased carcasses be cremated (burned to ashes) or buried deep and covered with quick lime before covering with soil. Quick lime is Calcium Oxide (CaO) and should be used with extreme care. Quick lime will react quickly with water and form a calcium hydrate (CaO + H2O Þ Ca(OH2)). Quick lime pulls water from plants, bacteria, fungi and any other living organism.

Anthrax spores may also spread by flooding pastures with contaminated water or dumping infected carcasses in streams or ponds. Low lying ground or marshy areas are readily contaminated by flooding, and resultant stagnant water holes may serve as a source of infection. Hay that is infested with spores may account for outbreaks of acute anthrax during the winter months. However, anthrax is predominantly a warm weather disease and is rarely diagnosed in North Dakota during the winter.

It is best to use soil infected with the anthrax organism to raise cultivated crops. Anthrax spores are known to survive in the soil 100 years or longer.

Anthrax may also be spread through wounds caused by blood sucking insects, dehorning, or castration. Outbreaks have occurred because of contaminated feed, particularly through bone meal, meat scraps, and other animal protein products. Present regulations pertaining to manufacture and importation of such animal products virtually eliminate these as a source of infection.

Humans may become infected by handling contaminated hides or wool, or by examining infected carcasses.

Symptoms
Symptoms associated with anthrax depend to a certain degree on the species involved and the route of infection. When the anthrax organism enters the animal’s body by mouth or nostrils, the symptoms occur soon after infection (acute form) followed rapidly by death. When infection takes place through the skin because of injury or insect bites, it appears localized at the site of injury in the initial stage.

The affected area is initially hot and swollen, and becomes cold and insensitive. Later, the infection can become generalized.

Anthrax usually is a fatal disease with no symptoms observed. Upon or near death, blood oozes from the body openings. This blood is heavily laden with anthrax organisms. There is a marked bloating and rapid decomposition of the carcass.

If the infection is less acute, there may be a sudden staggering, difficult breathing, trembling, collapse, and death. In horses, colic may be observed. Edema and swelling may be seen over the body, particularly at the brisket. Illness is observed for one or two days, but it may last five days; symptoms are preceded by fever, with a period of excitement in which the animal may charge anyone nearby. This is followed by depression in cattle or sheep.

Sometimes the anthrax organism localizes itself in the throat area. The tongue, throat, and neck are extremely swollen and a frothy blood-tinged discharge comes from the mouth. Though this is the typical form of anthrax observed in swine, it may also occur in cattle and sheep.

Diagnosis of Anthrax
Not all cases of “sudden death” are anthrax, but if anthrax is suspected, confirmatory laboratory examination is needed.

If anthrax is suspected, do not perform a necropsy. Using aseptic technique, have a veterinarian collect a jugular sample of venous blood and send or deliver it to the diagnostic laboratory in a sealed, sturdy, leakproof, iced container, with an accompanying history identifying it as an anthrax suspect.

Treatment and Control
Anthrax is highly fatal and it is difficult to treat affected animals. Long acting penicillin is the antibiotic of choice. Response to treatment may vary; best results are obtained when drugs are administered early during an outbreak. If antibiotics are used, vaccination with an anthrax vaccine should be delayed for one to two weeks. The vaccine is a modified-live bacterin and antibiotics will kill or neutralize the vaccine.

An effective vaccine is available (non-encapsulated, Sterne 34F2 strain). Since anthrax is a reportable disease, details on use of the vaccine should be coordinated through the Office of the State Veterinarian. It is relatively safe and provides effective protection on most species of livestock. Use caution when administering to goats and llamas; cases have been reported of the vaccine actually causing the disease in these species.

If the anthrax vaccine is used, all label directions must be followed for proper withdrawal times including withholding of milk and meat products from the market.

Disposal
The carcass and all materials associated with the carcass should be destroyed and the ground should be disinfected. This can be very difficult. The preferred method of destruction would be incineration of the carcass. Burying the carcass deep (at least 6 feet) and covering with quick lime is still acceptable.

The following are general recommendations for burning a 1000 pound carcass: a pit about 2 feet deep and exceeding the length and breadth of the carcass by about 1 foot on each side is dug. A 1 foot by 1 foot trench is dug along the length of the center of the pit extending beyond the ends of the pit by about 3 feet; this serves as an air duct for the fire under the carcass. The trench is filled and the bottom of the pit is covered with straw and soaked with accelerant (kerosene or diesel fuel).

Heavy timbers such as railroad ties cut to fit across the trench and within the sides of the pit are placed on top of the straw. Other pieces of wood (or coal) are added until the pit is filled to level with the ground surface. This is all saturated with accelerant.

The carcass can then be lifted or drawn onto the pyre. Further accelerant is poured over the carcass. The fire is ignited at either end of the trench. Once the incineration is well underway (probably after the first hour), the pyre should be covered with corrugated metal or other metal sheeting to retain heat but not lose ventilation.

The approximate quantities of fuel that will be needed are 50 pounds of straw, 2½ gallons of accelerant, and 2 tons of wood or ½ ton of wood and ½ ton of coal.

If soil and other related materials cannot be incinerated, it can be disinfected with 5 percent formaldehyde solution at 50 quarts per square yard.

Personnel Protection
If anthrax is suspected, aseptically collect a jugular blood sample for culture. DO NOT NECROPSY THE ANIMAL.

Producers should take every precaution to avoid skin contact with the potentially contaminated carcass and soil. Protective, impermeable clothing and equipment such as rubber gloves, rubber or leather apron, and rubber boots with no perforations should be used. No skin, especially that which is compromised with wounds or scratches, should be exposed. Disposable personal protective equipment is preferable, but if not available, decontamination can be achieved by washing any exposed equipment in hot water and detergent. Disposable personal protective equipment should be burned and buried with the carcass.

The Bacillus anthracis organisms range from 0.5-5.0 um in size. Veterinarians and producers working with anthrax suspects or confirmed cases should wear respiratory equipment capable of filtering this size of particle. A National Institute for Occupational Safety and Health (NIOSH) and Mine Safety and Health Administration (MSHA) approved high efficiency-respirator, such as a half-face disposable respirator with a high-efficiency particulate air (HEPA) filter, is recommended when conducting soil remediation and burial and when applying quicklime to soil.

Human Implications
Anthrax is a zoonotic disease (disease that can affect both man and animals). Anthrax in humans can take three forms: cutaneous, respiratory, and intestinal.

The cutaneous or skin form occurs when anthrax spores invade a cut or abrasion. Initially the site will itch followed by swelling and discoloration of the affected area. Pain is not usually present. If left untreated, cutaneous anthrax can eventually become septicemic and lead to death. Antibiotic therapy is very effective for the cutaneous form of anthrax.

The respiratory form of anthrax occurs when the spores are inhaled and then infect the lung tissue. Initial symptoms are mild and may resemble having the flu or common cold. The disease will progress at a rapid rate with shock developing within three to five days, followed shortly by death. Once shock has developed, any therapy is met with limited success.

The intestinal form of anthrax occurs when spores are ingested, primarily through ingesting contaminated meat. It is a very rare condition and almost always involves an explosive foodborne outbreak where many individuals are involved. These cases are usually reported from underdeveloped countries where dead animal carcasses are sometimes salvaged for human food. Symptoms include fever, abdominal distress, shock, and death.

Regulation Pertaining to the Control of Anthrax

Disposition of carcass of animal dying from contagious or infectious disease.

Any animal that is found dead must be presumed to have died from a contagious or infectious disease until the contrary is shown unless another cause of death is apparent. The owner or person in charge of any domestic animal or nontraditional livestock that dies within this state from or on account of any contagious or infectious disease shall dispose of the carcass of such animal as follows:

All livestock on farms where anthrax has been diagnosed shall be vaccinated. All animals shall be quarantined for thirty days after the death of the last animal or thirty days following vaccination. Sale of hides removed from animals infected with anthrax is prohibited.

NDSU Extension Service, North Dakota State University of Agriculture and Applied Science, and U.S. Department of Agriculture cooperating. Sharon D. Anderson, Director, Fargo, North Dakota. Distributed in furtherance of the Acts of Congress of May 8 and June 30, 1914. We offer our programs and facilities to all persons regardless of race, color, national origin, religion, sex, disability, age, Vietnam era veterans status, or sexual orientation; and are an equal opportunity employer.

This publication will be made available in alternative formats for people with disabilities upon request, 701/231-7881. 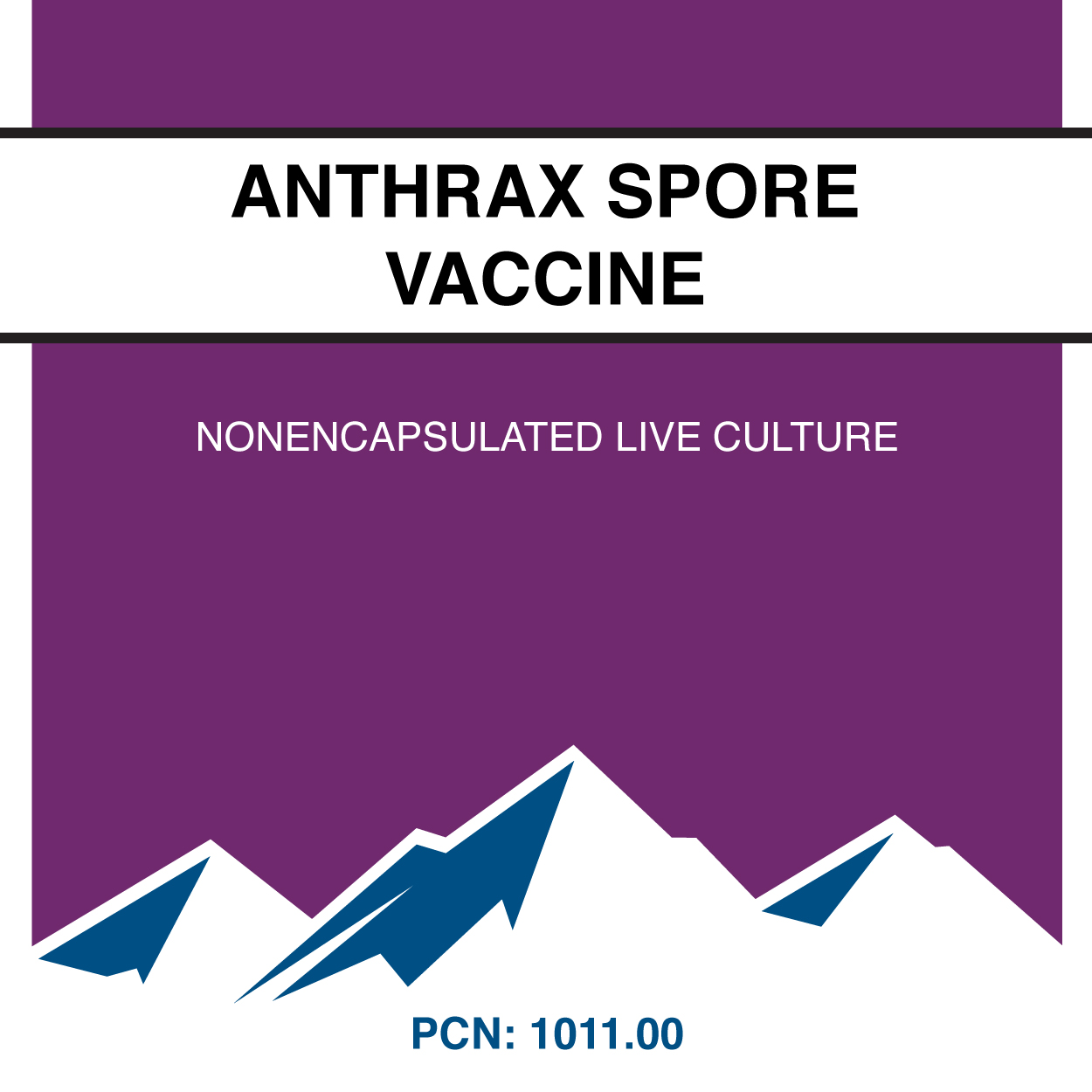